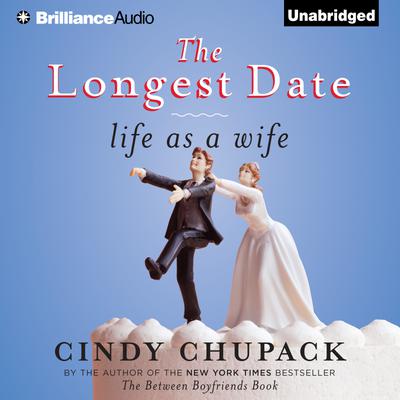 Life as a Wife

After having endured enough emotional wreckage in her search for true love to fill a book (the New York Times bestseller The Between Boyfriends Book), two magazine columns, and five seasons of scripts for Sex and the City, Cindy Chupack finally, mercifully, at the age of thirty-nine, met the Perfect Man.

He did not seem to Cindy like the Perfect Man. Ian, with his bad-boy ways, struck her as someone whom she absolutely did not want as a husband, but he soon proved his worth with wit, warmth, a series of spectacularly cooked meals, and a marriage proposal made on a beautiful beach, the prospective groom perched heroically on a white stallion.

Unable to resist the romance, Cindy married him and settled in contentedly for the long and gratifying happily ever after...or so she thought. Being a wife, Cindy discovers soon enough, is not so different from being a girlfriend, only now you have a permanent houseguest. Ian’s endearing quirks became impossible-to-ignore and slightly irksome habits; what was once charming adventurousness now seems like recklessness (just why was he rappelling down the side of a building on a garden hose?); and his impossibly big heart has space enough for an impossibly big dog, a St. Bernard that looks, as Cindy realizes once it has taken possession of her home, “like a person in a dog suit.” And then there’s all his stuff.

The Longest Date is the wonderfully funny, and ultimately, deeply moving story of a marriage, of the daily negotiations and accommodations about matters like cooking, holidays, space, money, and sex that every (newly or otherwise) wedded couple faces in the course of figuring out exactly who they are together and where they are headed. Cindy and Ian’s own ongoing courtship takes a surprising turn when they decide to have a baby—a plan that turns out to be far more complicated than they ever could have anticipated and that tests and strengthens their love for each other.

The perfect companion for anyone navigating a marriage (or even just contemplating one), The Longest Date marks the welcome return of one of our most gifted and captivating comic writers.