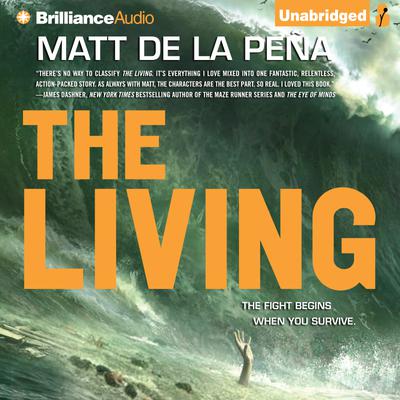 Shy takes the summer job to make some money. A few months on a luxury cruise liner—how bad can it be? Bikinis, free food, maybe even a girl or two…every cruise has a fresh crop of passengers, after all. He’ll rake in the tips and be able to help his mom and sister out with the bills.

But then, an earthquake more massive than any ever recorded hits California and Shy’s life is changed forever.

The earthquake is only the beginning. Twenty-four hours and a catastrophic chain of events later, Shy is lost at sea, fighting to survive—and stuck with her.

She’s blond and she’s rich, and never in her life would she have dreamed she’d be adrift in the Pacific Ocean, surrounded by death and completely dependent on a guy like Shy.

And Shy hasn’t even faced the worst yet.

“[The Living] is special because of its extraordinary protagonist, Shy, who I haven’t been able to shake from my mind in the weeks since I read the book.” —John Green, author of The Fault in Our Stars

“An addictive page-turner and character-driven literary novel with broad appeal for fans of both.” —Kirkus Reviews, starred review