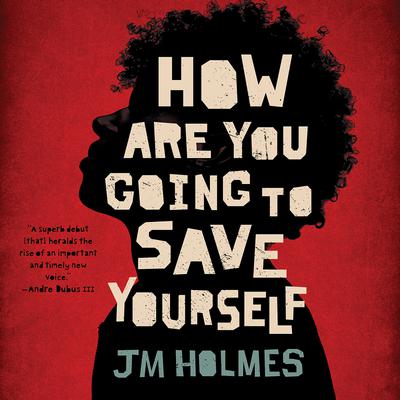 How Are You Going to Save Yourself

How Are You Going to Save Yourself

“How are You Going to Save Yourself by J.M. Holmes is an intense look at the lives of four young African American men and how their interactions with and reactions to the world at large inform their self-worth and actions. Each individual has different assets and challenges but their experiences of racial bias lead to more similarities than differences in the way each man connects with the people in their lives. Graphic and at times uncomfortable, Holmes forces us to look at the reality of the African American male experience in America today.”

Four young men struggle to liberate themselves from the burden of being black and male in America in an assured debut "as up-to the-minute as a Kendrick Lamar track and as ruefully steeped in eternal truths as a Gogol tale" (Kirkus, starred review).

Bound together by shared experience but pulled apart by their changing fortunes, four young friends coming of age in the postindustrial enclave of Pawtucket, Rhode Island, struggle to liberate themselves from the legacies left to them as black men in America. With potent immediacy and bracing candor, this provocative debut follows a decade in the lives of Dub, Rolls, Rye, and Gio as they each grapple with the complexity of their family histories, the newfound power of sex and drugs, and the ferocity of their desires.

Gio proves himself an unforgettable narrator, beautifully flawed and unstintingly honest, as he recounts both the friends' conflicts and their triumphs. Whether it's a fraught family cookout, a charged altercation on the block, a raucous night in high-society Manhattan gone wrong, or the troubled efforts of a drug hustler to go clean, JM Holmes brings the thump and the heat of his scenes to life with the kind of ease that makes us not just eavesdroppers but participants.

How Are You Going to Save Yourself illuminates in breathtaking detail an entire world-one that has been underrepresented in American fiction. At times funny, often uncomfortable, occasionally disturbing, these stories fearlessly engage with issues of race, sex, drugs, class, and family. Holmes's blistering and timely new voice, richly infused with the unmistakable rhythms of hip-hop that form the sound track to his characters' lives, delivers an indelible fiction that has never been more vital and necessary.