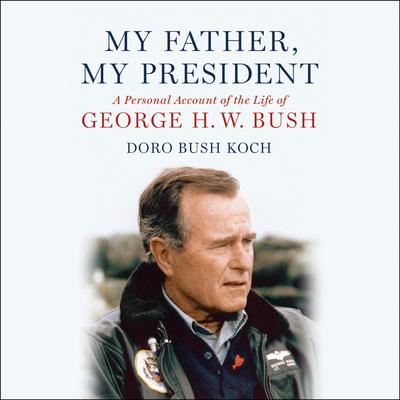 My Father, My President

A Personal Account of the Life of George H. W. Bush

The 41st President of the United States, George H.W. Bush, passed away on November 30, 2018 at the age of 94. This book, written by his only daughter, with his full cooperation, is the definitive account of his life and career. Doro Bush Koch has crafted six new chapters about her late father, and has included many photographs new to this revised and updated edition.

Much happened to George H.W. Bush and the country since the initial publication of My Father, My President: His nemesis, Saddam Huessin, has been captured and executed. And while his son George W. Bush has left the White House, his grandson George P. Bush serves as the Commissioner of the Texas General Land Office.

As author Doro Bush Koch did for the 2006 edition, she again has contacted hundreds of the late President's friends and associates, conducted scores of interviews with dignitaries; tapped the memories of family members, including her late mother, her four brothers, and of course, her late father himself; and collected new information from the former President's never-before released files.

This memoir offers fascinating details about his tenure as head of the Republican National Committee during Watergate, Ambassador to the U.N., America's liaison to China, and Vice President for eight years under Ronald Reagan. Doro shows how the 41st President felt when two of his sons entered politics. She also sheds new light on the unlikely friendship with the President's once-rival Bill Clinton and former President Barack Obama. Distinguished by its many first-person accounts, never-before-published photos, and a foreword by the late Barbara Bush, My Father, My President is at once the history of a great man, and the chronicle of a rapidly changing nation.