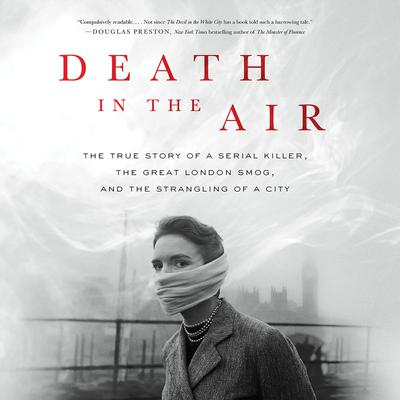 Death in the Air

The True Story of a Serial Killer, the Great London Smog, and the Strangling of a City

A real-life thriller in the vein of The Devil in the White City, Kate Winkler Dawson's debut Death in the Air is a gripping, historical narrative of a serial killer, an environmental disaster, and an iconic city struggling to regain its footing.

London was still recovering from the devastation of World War II when another disaster hit: for five long days in December 1952, a killer smog held the city firmly in its grip and refused to let go. Day became night, mass transit ground to a halt, criminals roamed the streets, and some 12,000 people died from the poisonous air. But in the chaotic aftermath, another killer was stalking the streets, using the fog as a cloak for his crimes.

All across London, women were going missing--poor women, forgotten women. Their disappearances caused little alarm, but each of them had one thing in common: they had the misfortune of meeting a quiet, unassuming man, John Reginald Christie, who invited them back to his decrepit Notting Hill flat during that dark winter. They never left.

The eventual arrest of the "Beast of Rillington Place" caused a media frenzy: were there more bodies buried in the walls, under the floorboards, in the back garden of this house of horrors? Was it the fog that had caused Christie to suddenly snap? And what role had he played in the notorious double murder that had happened in that same apartment building not three years before--a murder for which another, possibly innocent, man was sent to the gallows?

The Great Smog of 1952 remains the deadliest air pollution disaster in world history, and John Reginald Christie is still one of the most unfathomable serial killers of modern times. Journalist Kate Winkler Dawson braids these strands together into a taut, compulsively readable true crime thriller about a man who changed the fate of the death penalty in the UK, and an environmental catastrophe with implications that still echo today.