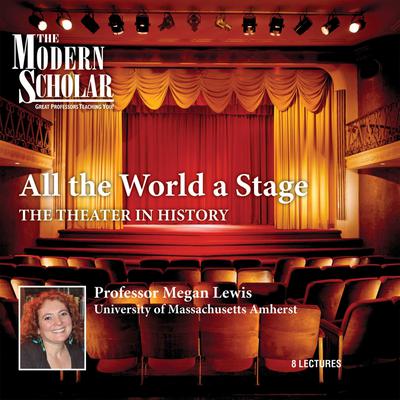 All the World a Stage

The Theater in History

Western Curriculum Course #1212600 Title: All the World A Stage: The Theatre in History Author: Professor Megan Lewis, University of Massachusetts Amherst Program Description: All the world is a stage, Shakespeare tells us, and we are all its players. In fact, since the dawn of human history, we find evidence of theatre and performance. And throughout that history, this unique art form has flourished. In this engaging series of lectures, theatre historian, Megan Lewis takes listeners on a journey from the ancient world of the Greeks and Romans to the modern era as she explores how theatre - a live event that synthesizes many other art forms and disciples in a collaborative process of storytelling - entertains, educates, and inspires us, as well as helps build community and reflect society. Dr. Lewis begins by mapping the ancient origins of performance, as a communal storytelling and mythmaking endeavor, while she discusses the traditional birthplace of theatre in ancient Greece as well as its African predecessors. Subsequent lectures explore the classical origins of theatre in the West; the Roman Theatre; theatre in the medieval world; the national theatres of Shakespeare and Lope de Vega; the Elizabethan, Jacobean, and Restoration periods; as well as non-Western performance traditions in Asia, Africa, and India. In addition, physical theatres such as the Italian Commedia dell'arte and Japanese Bunraku puppetry are examined. Covering performances that make-believe and those that make belief , Professor Lewis also passionately discusses the art, politics and meaning of theatre and how it offers humans a space in which to imagine new realities and suggest different possibilitiesor to incite action and bring about social change. Lecture Titles: Lecture 1: Tragedy, Comedy & Community: The Ancient Origins of Drama I Lecture 2: Comedy, Bread & Spectacles: The Ancient Origins of Drama II Lecture 3: Myths, Morality & Mayhem: Medieval, Noh& Kathakali Lecture 4: Physical Theatres: Commedia dell arte, Kabuki, and Bunraku Lecture 5: The Golden Age of Spanish Drama Lecture 6: Elizabethan and Jacobean Theatre Lecture 7: Restoration Theatre Lecture 8: Theatre' s Shifting Purpose: French Neoclassicism, Romanticism, and Realism About Professor Nelson: Prof. Megan Lewis is a South African-American theatre & performance scholar in the Department of Theater at the University of Massachusetts Amherst. She is a multidisciplinary educator with a passion for inspiring intellectual curiosity and advocating for the performing arts as a powerful force for social change. Her teaching and research passions include African theatre and film, the politics of performance, non-Western performance traditions, and the performance of nation, race, and gender. Dr. Lewis has published widely on South African performance in many academic journals and is working on a book about stagings of white South Africans in theatrical and public life, as well as a collection of essays about Cape Town-based Magnet Theatre. Find out more about Prof Lewis at umass.academia.edu/MeganLewis Assistant professor Megan Lewis has inspired countless students with her popular courses in theater history and criticism at the University of Massachusetts Amherst. Human beings have been performing since the dawn of history. While the ancient Greeks formalized the endeavor, theater has been an essential aspect of most civilizations. This engaging course explores the history of theater from its earliest incarnations to the modern day.