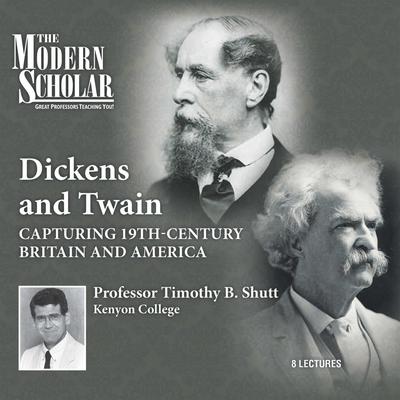 Western Curriculum Course #1212100 Title: Dickens and Twain: Capturing 19th-Century Britain and America Author: Timothy B. Shutt, Kenyon College Program Description: Few writers are more often read, and better loved, than Charles Dickens and Samuel Langhorne Clemens---Mark Twain. Many of the characters populating their novels have become household words, cultural landmarks in their own right---Tom Sawyer and Huckleberry Finn, David Copperfield and Oliver Twist. It is as if we have known them life-long. In this course we take a look at the lives and works of both authors, comparing, and celebrating them, in their use of use language, in their humor---and both, of course, are master humorists---in their evocation of character, and in their evocation and evaluation of the social world in which they find themselves. Lecture Titles: Lecture 1: Introduction Lecture 2: The Life of Charles Dickens Lecture 3: The Life of Samuel Lagnhorne Clemens, aka Mark Twain Lecture 4: Autobiography and Childhood, Mark Twain, Tom Sawyer and Huckleberry Finn Lecture 5: Autobiography and Childhood, Charles Dickens, David Copperfield Lecture 6: Twain and Dickens, Vision of Society Lecture 7: Twain and Dickens, Moral and Religious Vision Lecture 8: Twain and Dickens, Women, Sexuality, and Final Assessment About Professor Timothy B. Shutt: For over twenty years Professor Timothy Baker Shutt has taught at Kenyon College in Gambier, Ohio, famed for its splendid teaching, for its literary tradition, and for its unwavering commitment to the liberal arts. No teacher at Kenyon has ever been more often honored, both by the college and by his students, for his exceptional skills in the classroom and as a lecturer. He is the recipient of the Trustee Award for Distinguished Teaching and has thrice been awarded the Senior Cup, presented each year to the community member who has contributed most to the college. Prior to Kenyon, Shutt spent three years teaching English and History at St. Mark' s School of Texas - a private, K-12, college preparatory institution - where he also coached swimming. After earning his Ph.D. in 1984, Shutt spent two further years at Virginia as Mellon Post-Doctoral Research Fellow. He has published numerous works for Recorded Books Modern Scholar Series, included among them works titled The Life and Works of C.S. Lewis and Hebrews, Greeks, and Romans: The Foundations of Western Civilization. In April of this year, Professor Shutt was named in The Best 300 Professors, published by the Princeton Review.