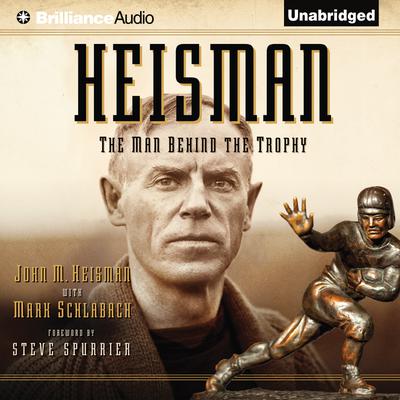 The Man Behind the Trophy

To the select fraternity of men who have won the Heisman Trophy since its inception in 1935, the award is so much more than just a football trophy. The Heisman is a national symbol of collegiate football experience and competitiveness. Over time, it has become the single most celebrated individual award in all of American sports.

Although the Heisman Trophy is old, it does not age. If anything, its impact gets stronger every year. No other individual award captures the country’s imagination like the Heisman does. From the very first time toe meets leather to kick off a college football season, fans across the country begin debating which players will be the top Heisman Trophy candidates.

While the Heisman Trophy is the most famous individual award in sports, very little is known about John W. Heisman, the man the Downtown Athletic Club of New York chose to honor in 1936 by naming its national player of the year award for him.

In Heisman: The Man Behind the Trophy, John M. Heisman, the legendary coach’s great-nephew, and New York Times bestselling author Mark Schlabach offer college football fans across the country the first authorized and definitive biography of the man whose life has been memorialized by the Heisman Trophy.

After combing through thousands of pages of Heisman’s personal documents, writings, playbooks, and never-before-published correspondence with some of college football’s most famous coaches, the authors have chronicled Heisman’s life from a young boy growing up on the oil fields of northwest Pennsylvania to eventually becoming one of the sport’s most innovative and successful coaches.