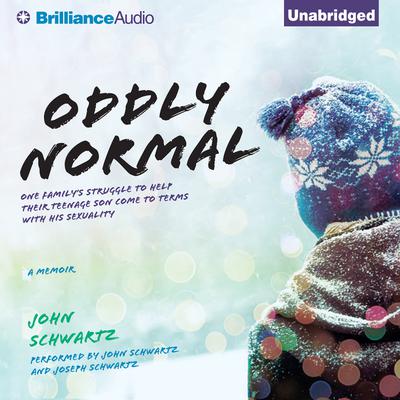 Three years ago, John Schwartz, a national correspondent for The New York Times, got the call that every parent hopes never to receive: His thirteen-year-old son, Joe, was in the hospital following a suicide attempt. Mustering the courage to come out to his classmates, Joe had delivered a tirade about homophobic and sexist attitudes that was greeted with unease and confusion by his fellow students. Hours later, he took an overdose of pills.

After a couple of weeks in the hospital and in the locked ward of a psychiatric treatment center, Joe returned to his family. As he recovered, his parents were dismayed by his school’s inability to address—or reluctance to deal with—Joe’s needs. Determined to help their son feel more comfortable in his own skin, Schwartz and his wife, Jeanne, launched their own search for services and groups that could help Joe know he wasn’t alone.

In Oddly Normal, Schwartz writes of his family’s struggles within a culture that is changing fast—but not fast enough. Interweaving his narrative with contextual chapters on psychology, law, and common questions, Schwartz shares crucial lessons about helping gay kids learn how to cope in a potentially hostile world. From buying rhinestone-studded toddler shoes to creating a “Joseph manual” for Joe’s teachers; from finding a hairdresser who stocks purple dye to fighting erroneous personality disorder diagnoses, Oddly Normal offers a deeply personal look into one boy’s growing up.

Joe, far happier today than he was three years ago, collaborated on this work.