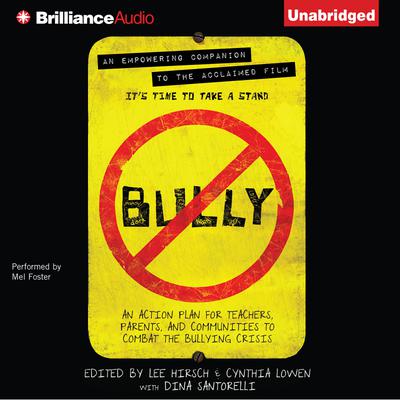 An Action Plan for Teachers, Parents, and Communities to Combat the Bullying Crisis

PRAISE FOR THE FILM:
“An insightful and moving documentary.” —USA Today

“Moving and touching…Bully forces you to confront…the extent to which cruelty is embedded in our schools and therefore in our society as a whole.” —New York Times, Critics’ Pick

ABOUT THIS AUDIOBOOK:
A companion to the acclaimed film Bully, this audiobook brings the story of the documentary beyond the closing credits, continuing the national conversation inspired by the film. Personal anecdotes from prominent antibullying activists and celebrities alongside essays from renowned experts, authors, government officials, and educators offer powerful insights, resources, and concrete steps to combat the bullying epidemic. An essential part of any campaign to decrease bullying and increase empathy, the audiobook also follows the stories of the families featured in the film beyond the big screen, who contribute valuable advice on the timely topic of bullying in our nation. This guide is crucial for parents, educators, school administrators, and anyone who is committed to the 13 million schoolchildren who will face bullying this year.

Amy McCready, founder of Positive Parenting Solutions, whose life’s work has been dedicated to helping parents and families

Marlo Thomas, actress and spokesperson for children, whose landmark Free to Be You and Me inspired a generation

Randi Weingarten, head of the American Federation of Teachers, who is making her union a major force for change in the effort to stamp out bullying