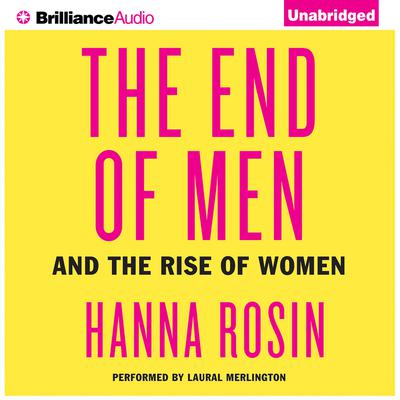 The End of Men

And the Rise of Women

Men have been the dominant sex since, well, the dawn of mankind. And yet, as journalist Hanna Rosin discovered, that long-held truth is no longer true. At this unprecedented moment, women are no longer merely gaining on men; they have pulled decisively ahead by almost every measure. Already “the end of men” — the phrase Rosin coined — has entered the lexicon as indelibly as Simone de Beauvoir’s “second sex,” Betty Friedan’s “feminine mystique,” Susan Faludi’s “backlash,” and Naomi Wolf’s “beauty myth” have.

This landmark, once-in-a-generation book will take its place alongside the works of those authors, forever changing the way we talk about men and women and what happens between them. Rosin reveals how the new world order came to be, and how it is dramatically shifting dynamics in every arena and at every level of society, with profound implications for marriage, sex, children, work, and more. With wide-ranging curiosity and insight unhampered by assumptions or ideology, Rosin shows how the radically different ways men and women today earn, learn, spend, couple up — even kill — have turned the big picture upside down, not just in the United States but all over the world. And in The End of Men she helps us to see how both men and women can adapt to the new reality and channel it for a better future.