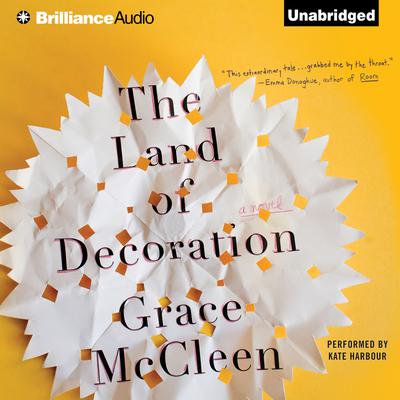 The Land of Decoration

Ten-year-old Judith McPherson is a believer. She sees the world with the clear Eyes of Faith. Where others might see rubbish, Judith finds possibility and traces of the divine.

But at school Judith’s difference marks her only for persecution at the hands of her classmates. And lately, even at home she struggles to find connection in a house filled with relics of a mother she’s never known. To escape, Judith makes things in the Land of Decoration, a model in miniature of the Promised Land made of collected scraps. Piece by piece, the world in her room mirrors the town outside: a discarded shoelace is a garden hose, an orange peel a slide. But in the Land of Decoration, nothing is what it once was, and nothing is quite as it seems.

As ominous forces disrupt the monotonous everyday—a strike threatens her father’s factory job, and the taunting at school slips into dangerous territory—Judith makes a miracle in the Land of Decoration that solidifies her blossoming convictions. She is God’s chosen instrument. But such a gift is difficult to control, its origins uncertain, and its consequences may threaten the very foundations of Judith’s world.

A debut as intimate and original as it is electrifying, The Land of Decoration casts startling light on how far one extraordinary young girl will go to protect the people she loves most.