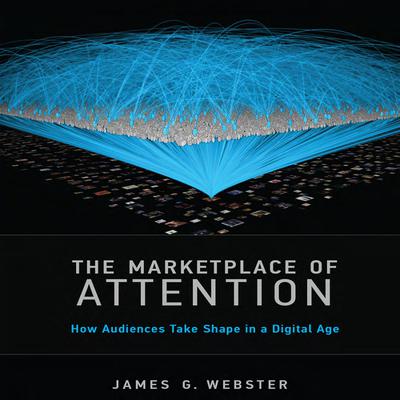 The Marketplace of Attention

How Audiences Take Shape in a Digital Age

Feature films, television shows, homemade videos, tweets, blogs, and breaking news: digital media offer an always-accessible, apparently inexhaustible supply of entertainment and information. Although choices seems endless, public attention is not. How do digital media find the audiences they need in an era of infinite choice? In The Marketplace of Attention, James Webster explains how audiences take shape in the digital age. Webster describes the factors that create audiences, including the preferences and habits of media users, the role of social networks, the resources and strategies of media providers, and the growing impact of media measures -- from ratings to user recommendations. He incorporates these factors into one comprehensive framework: the marketplace of attention. In doing so, he shows that the marketplace works in ways that belie our greatest hopes and fears about digital media. Some observers claim that digital media empower a new participatory culture; others fear that digital media encourage users to retreat to isolated enclaves. Webster shows that public attention is at once diverse and concentrated -- that users move across a variety of outlets, producing high levels of audience overlap. So although audiences are fragmented in ways that would astonish midcentury broadcasting executives, Webster argues that this doesn't signal polarization. He questions whether our preferences are immune from media influence, and he describes how our encounters with media might change our tastes. In the digital era's marketplace of attention, Webster claims, we typically encounter ideas that cut across our predispositions. In the process, we will remake the marketplace of ideas and reshape the twenty-first century public sphere.