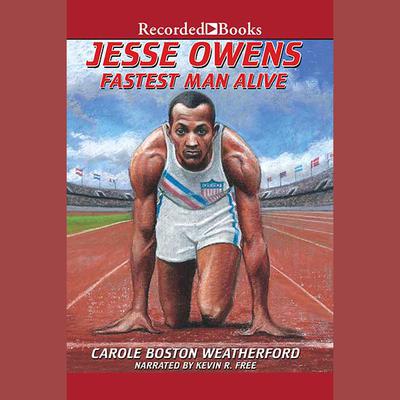 Jesse Owens' mother frequently told him, "Put your best foot forward." So Jesse followed her advice, worked hard, and made his dreams come true as one of the greatest Olympic champions of all time. But it wasn't easy, as Jesse had to overcome many obstacles. Even though World War II hadn't started yet, Adolf Hitler controlled Germany during the 1936 Olympics. He wanted to prove during the games that Germans were a superior "race" to other people of the world. Little did he know that a black American would smash those claims by dominating the games as no athlete had before. Carter G. Woodson Award-winning author Carole Boston Weatherford captures the incredible story of a true American hero who raced his way into our history books. Narrator Kevin R. Free's thrilling performance will have listeners cheering Jesse's every step. "This inspirational story will serve many purposes in the classroom, from discussions about prejudice, the Holocaust, and segregation, to the importance of role models who are examples of determination, sportsmanship, and hard work."-Children's Literature