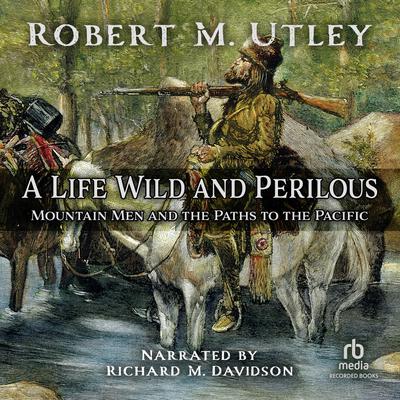 A Life Wild and Perilous

Mountain Men and the Paths to the Pacific

If you have ever wondered what is was like to be an explorer in the unspoiled American West of the early 1800s, then this is the audiobook for you. Not only a groundbreaking work of American history by critically acclaimed author Robert M. Utley, A Life Wild and Perilous is also a dramatic story of innovation and survival. Here is your chance to live in the very heart of the American wilderness with legendary trappers and mountain men like Jim Bridger, Kit Carson, Tom Fitzpatrick, and Jedediah Smith. You will also see how these men played a major role in pushing our national frontier from the Mississippi River to the Pacific Ocean, and fulfilling our nation's ideal of Manifest Destiny. Breathtaking in scope, yet filled with the seemingly small decisions that changed the course of a nation, A Life Wild and Perilous is a compelling and fascinating piece of Americana. Travelogue buffs and historians alike will delight in Richard M. Davidson's inspired telling of how the West was really won.