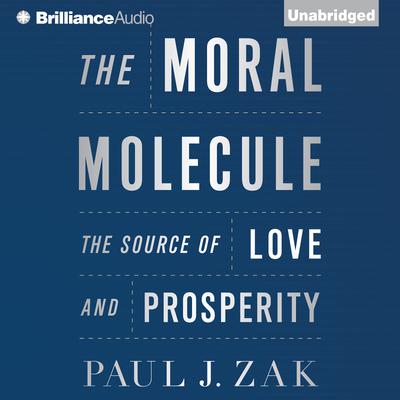 The Source of Love and Prosperity

Human beings can be so compassionate—and yet they can also be shockingly cruel. What if there was a hidden master control for human behavior? Switch it on and people are loving and generous. Switch it off and they revert to violence and greed. Pioneering neuroeconomist Paul J. Zak has discovered just such a master switch, a molecule in the human brain.

The Moral Molecule is a firsthand account of this discovery, revealing how evolution built the Golden Rule into our biology. From his laboratory in California to the jungles of Papua New Guinea, Zak takes you on an amazing and exciting journey to what it means to be human.

Zak’s experiments—what science writer Matt Ridley called “the most revealing in the history of economics”—measure a brain chemical called oxytocin found in the bloodstream. His colleagues sometimes call him the vampire economist. His research team has taken blood from thousands of people as they made decisions with money in the lab, played football out on the field, jumped from an airplane, attended a wedding, and many other situations in which human interactions take place. Ascending from molecules to families to entire societies, Zak’s findings reveal how oxytocin can produce a virtuous cycle of love and prosperity.

The Moral Molecule is a journey well beyond common theories about why we make the decisions we do. Zak explains what underlies the great mysteries of human behavior—why some husbands are more faithful than others; why women tend to be more generous than men; why we are sometimes rational and other times irrational. He explores the role of religion in moral behavior, how the moral molecule operates in the marketplace, and—most important, once we understand the moral molecule—how we can consciously use it to make our own lives better.