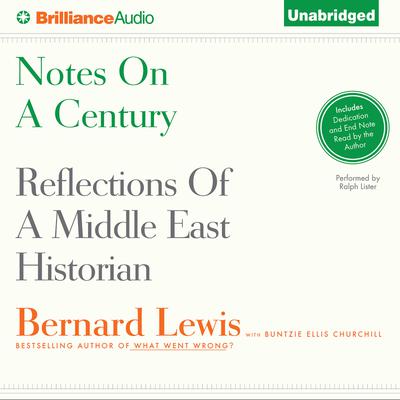 Notes on a Century

Reflections of a Middle East Historian

Few historians end up as historical actors in their own right, but Bernard Lewis has both witnessed and participated in some of the key events of the last century. When we think of the Middle East, we see it in terms that he defined and articulated.

In this exceptional memoir he shares stories of his wartime service in London and Cairo, decrypting intercepts for MI6, with sometimes unexpected consequences. After the war, he was the first Western scholar ever invited into the Ottoman archives in Istanbul. He coined the term “clash of civilizations” in the 1950s, when no one imagined that political Islam would one day eclipse communism. A brilliant raconteur with an extraordinary gift for languages (he mastered thirteen), he regales us with tales of memorable encounters with Edward Kennedy, the Shah of Iran, Golda Meir, and Pope John Paul II among many others.

September 11 catapulted him onto the world stage as his seminal books What Went Wrong? and Crisis of Islam leaped onto bestseller lists. In his first major book since the second Iraq war, Lewis describes how—contrary to popular fiction—he opposed the war and reveals his exchanges with the Bush administration outlining his far greater concerns about Iran.

For more than half a century, Bernard Lewis has taken influential and controversial positions on contemporary politics and on the politics of academe. A man of towering intellect and erudition, he writes with the flair of Toynbee or Gibbon, only he has seen more and is much funnier.