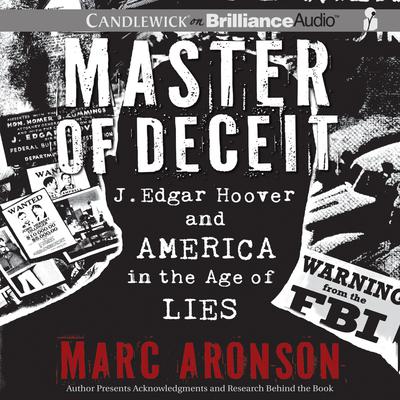 J. Edgar Hoover and America in the Age of Lies

“King, there is only one thing left for you to do....Take it before your filthy, abnormal, fraudulent self is bared to the nation.”

Dr. Martin Luther King received this demand in an anonymous letter in 1964. He believed that the letter was telling him to commit suicide.

Who wrote this anonymous letter? Most likely William Sullivan, an assistant director of the FBI.

Who was Sullivan trying to impress in his campaign against King? J. Edgar Hoover.

In this unsparing exploration of one of the most powerful Americans of the twentieth century, accomplished historian Marc Aronson unmasks the man behind the Bureau—his tangled family history and personal relationships; his own need for secrecy, deceit, and control; and the broad trends in American society that shaped his world. Hoover may have given America the security it wanted, but the secrets he knew gave him—and the Bureau—all the power he wanted. Master of Deceit challenges readers to explore Hoover and his secrets by offering dossiers of photos from his files, as well as FBI memoranda, movie posters, magazine covers, and cartoons from the era. Was Hoover a protector of America or a betrayer of its principles? What is the price of security? Here is a book about the twentieth century that blazes with questions and insights about our choices in the twenty-first.