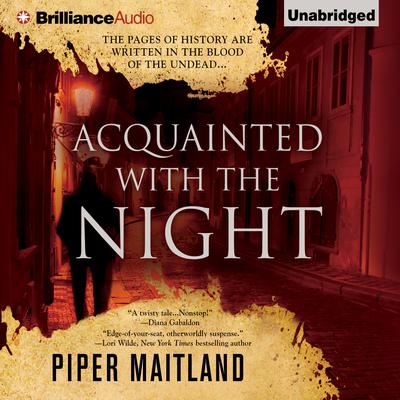 Acquainted With the Night

Caroline Clifford’s bland life as a London tour guide flips upside down when her beloved uncle is brutally murdered at a Bulgarian archaeological site. While traveling to recover his remains, she meets a man who corresponded with her uncle. Jude Barrett is a biochemist on a mission — to rid the world of vampires… At first, Caro is dismissive of Jude’s beliefs, but she can’t ignore the signs that are all around her: the human bite marks on her uncle, the men following her, the anguished cries after sundown. Strange anagrams on her uncle’s passport lead her and Jude to a cliff-top monastery in Greece, where a shattering revelation connects a relic Caro inherited from her parents to an age-old text on immortality — and an enigmatic prophecy that pits the forces of darkness and light in a showdown that could destroy them all... “A fantastic read. Smart and sophisticated... A Da Vinci Code–esque adventure with a fresh take on vampirism and an emotional, sexy romance.” —Virna DePaul, author of Chosen by Blood “Bulgarian vampires and nonstop sex (not with the Bulgarian vampires), PLUS an illuminated lost manuscript, in a twisty tale of family mystery, murder, and corporate greed.” —Diana Gabaldon, New York Times bestselling author of the Outlander series “A singe-your-fingers page-turner. Don’t miss this one.” —Shirley Hailstock, author of Some Like Them Rich