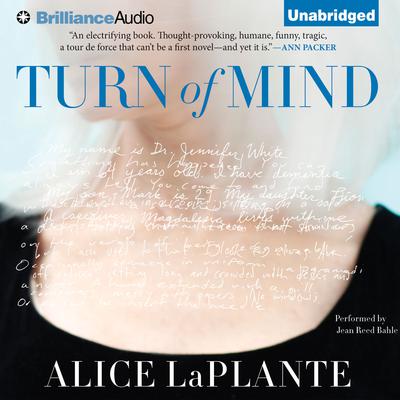 My name is Dr. Jennifer White. I am sixty-four years old. I have dementia. My son, Mark, is twenty-nine. My daughter, Fiona, twenty-four. A caregiver, Magdalena, lives with me. Alice LaPlante’s Turn of Mind is a spellbinding novel about the disintegration of a strong woman’s mind and the unhinging of her family. Dr. Jennifer White, recently widowed and a newly retired orthopedic surgeon, is entering the beginning stages of dementia — where the impossibility of recognizing reality can be both a blessing and a curse. As the story opens, Jennifer’s life-long friend and neighbor, Amanda, has been killed, and four fingers surgically removed. Dr. White is the prime suspect in the murder and she herself doesn’t know if she did it or not. Narrated in her voice, fractured and eloquent, a picture emerges of the surprisingly intimate, complex alliance between this pair — two proud, forceful women who were at times each other’s most formidable adversaries. The women’s thirty-year friendship deeply entangled their families, and as the narrative unfolds we see that things were not always as they seemed. Jennifer’s deceased husband, James, is clearly not the scion he was thought to be. Her two grown children — Mark, a lawyer, and Fiona, a professor, who now have power over their mother’s medical and financial decisions respectively — have agendas of their own. And Magdalena, her brusque live-in caretaker, has a past she hides. As the investigation intensifies, a chilling question persists: is Dr. Jennifer White’s shattered memory preventing her from revealing the truth or helping her to hide it? Told through the voice of a woman with a powerful intellect that is maddeningly slipping away, Turn of Mind is not only a suspenseful psychological thriller that pulses with intensity but also a brilliant portrayal of the fragility of consciousness and memory, and of a mind finally turning on itself. “Turn of Mind is bursting with humanity, in full array. Impossible to put down and yet a book not only to be savored, but returned to. A glorious achievement.” —Jeffrey Lent