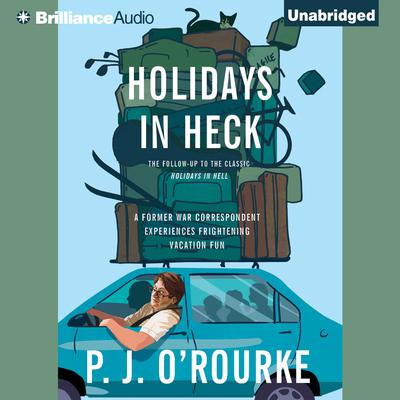 P. J. O’Rourke is one of his generation’s most celebrated political humorists, hailed as “the funniest writer in America” by both Time and The Wall Street Journal. Twenty-three years ago, he published the classic travelogue Holidays in Hell, in which he trotted the globe as a “trouble tourist,” a chaos rubberneck, sight-seeing at wars, rebellions, riots, political crises, and other monuments of human folly. After the Iraq War—“too old to keep being scared stiff and too stiff to keep sleeping on the ground”—he retired from what foreign correspondents call “being a s**thole specialist.” But he couldn’t give up traveling to ridiculous places, often with his wife and three young children in tow. Usually he was left wishing he were under artillery fire again.

O’Rourke’s journeys take him to locales both near (and nearly bizarre) and far (and far from normal). Having made a joke that Ski magazine takes seriously, he winds up on a family ski vacation—to Ohio. The highest point of elevation is the six-foot ski instructor his wife thinks is cute. Convinced by an old friend and one too many drinks that “a horse trek is just backpacking on someone else’s back,” he finds himself (barely) in the saddle, crossing the mountains to a part of Kyrgyzstan so remote that the Kyrgyzs have never seen it. He visits Kabul for the food and conversation (excellent lamb chops and a droll after-dinner story about the mullah and the cow). He even takes his kids to his erstwhile home away from home, the bar at the Foreign Correspondents Club in Hong Kong.

Holidays in Heck shows P. J. O’Rourke in top form—a little older, a little wiser, going to the bathroom a little more often, but just as darkly funny as he was in Holidays in Hell. Here is a hilarious and often moving portrait of life in the fast lane, as he’s always lived it—only this time with the backseat driver that marriage entails and three small hostages to fortune strapped into the booster seats.