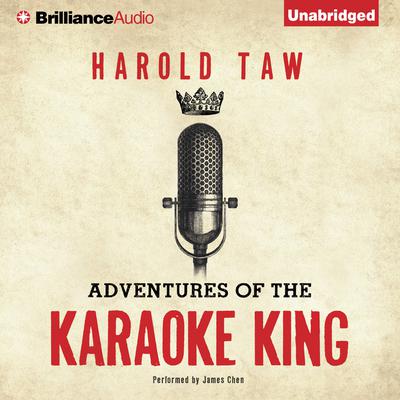 Adventures of the Karaoke King

In Harold Taw’s entertaining, sometimes bawdy, and often moving novel, Adventures of the Karaoke King, readers are quickly pulled into the vortex of the extremes of human emotions: passion, fear, hope, despair, and the longing for redemption and clarity.

Guy Watanabe is a thirty-something man who is marginally in touch with his Asian heritage and completely out of touch with his own needs and desires. Recovering from a divorce, Watanabe is unsure of himself and the course his future might take. When he wins a local karaoke contest, he discovers not only a newfound confidence, but the courage to take risks. With the victor’s medallion in hand, he seizes the moment…and his life changes dramatically, albeit not as he might have hoped. From a weekend romp with Megumi, a former hooker, comes a physical beating and the loss of his beloved medallion. Stung by this humiliation, and yet able to muster a courage long dormant, his quest begins.

From the western states and on to Asia, with a return trip in a shipping container, we follow his wild ride. Will a Korean barmaid be his downfall…or his redemption? Will Billy, a closeted gay man, or Milt, a heavily-armed dwarf, help Guy on his journey? And what about the patricidal Chinese businessman who will stop at nothing to create a global karaoke empire? So many people seeking the light, desperate to attain their dreams. And at the heart of their internal wars is Guy Watanabe’s quest for truth, hope, and self-discovery.