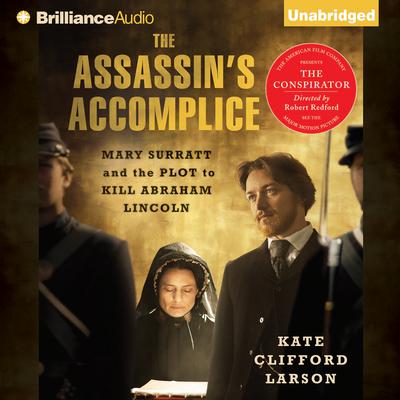 Mary Surratt and the Plot to Kill Abraham Lincoln

In The Assassin’s Accomplice, historian Kate Clifford Larson tells the gripping story of Mary Surratt, a little-known conspirator in the plot to kill Abraham Lincoln, and the first woman ever to be executed by the federal government. A Confederate sympathizer, Surratt ran the boarding house where the conspirators met to plan Lincoln’s assassination. Set against the backdrop of the Civil War, The Assassin’s Accomplice tells the intricate story of the Lincoln conspiracy through the eyes of its only female participant, offering a fresh perspective on America’s most famous murder.

“A masterful recounting of the surprisingly wide and intricate conspiracy of Southern sympathizers who formed the murder plot, focusing on perhaps the most controversial figure in the story.” —Minneapolis Star-Tribune

“Larson captures brilliantly the atmosphere of Mary Surratt’s trial in a crowded court room.… Her description of the drama of Mary’s last hours, when she was broken by a death sentence that neither she nor her lawyers had believed possible, makes compelling reading.” —Spectator (UK)

“[A] spirited narrative… the tale itself could not be better told, nor could the cast of characters be brought more to life.” —Publishers Weekly