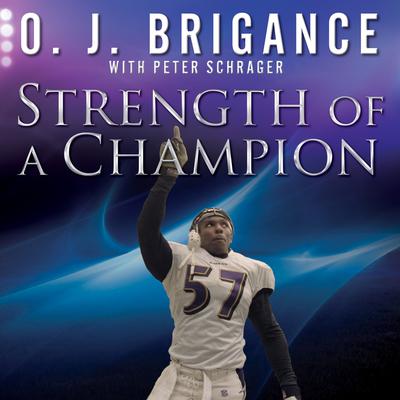 Strength of a Champion

Finding Faith and Fortitude Through Adversity

As the Baltimore Ravens made their improbable march to victory in Super Bowl XLVII, they turned to their senior advisor of player development, O. J. Brigance, for inspiration each and every Sunday. Following a stellar twelve-year career as a linebacker, including a Super Bowl win with Baltimore in 2000, O. J. "Juice" Brigance joined the Ravens' front office. But in 2007, Brigance was diagnosed with amyotrophic lateral sclerosis—also known as Lou Gehrig's disease—and told he had only three to five years to live. As a player, he'd battled hundreds of injuries and setbacks. None of them prepared him to face ALS.

With faith and determination in his heart and his wife, Chanda, praying by his side, Brigance fought back against the debilitating disease, even as ALS robbed him of the ability to walk and speak. He kept working, smiling, and touching his players' lives all the way through their remarkable Super Bowl run—more than five years after his diagnosis.

Now, Brigance shares his incredible story, offering lessons in resilience and reflecting on the championship team that inspired him in turn. Along with his own journey, Brigance recounts the struggles and successes of Ravens players, including Ray Lewis, Joe Flacco, and Torrey Smith, as well as the strength of head coach John Harbaugh. Having watched their season from the best seat in the house, Brigance highlights their perseverance, confidence, and leadership, and the best that sports can bring out in people.

Full of profound revelations and never-before-told anecdotes, Strength of a Champion is a celebration of the human spirit from a man who left everything on the field. O.J. Brigance never asked to be a hero. That's what makes his story so courageous.