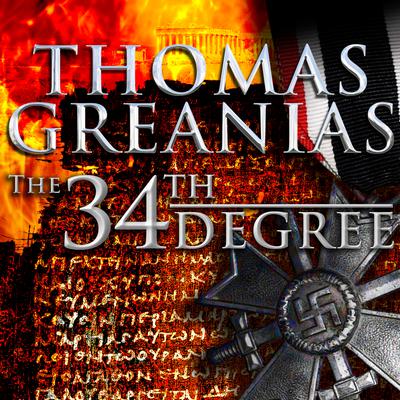 An ancient text. A world at war. The end of history. Prepare to be initiated into The 34th Degree.

1943. The supernatural alchemy for the ultimate weapon, encoded in an ancient biblical text, has fallen into the hands of the most ruthless secret society known to man—the Nazi SS.

Present Day. Dishonorably discharged from the armed forces after the events of The Promised War, Sam Deker is trying to build a new life in Los Angeles. But nightmares of the past continue to haunt his present, and Deker discovers that the unusual lightwave-induced torture he barely survived has changed him.

The Pentagon, however, believes that change makes him the only one who can endure their top-secret neuro-simulation program known as the 34th Degree. The stunning technological breakthrough uses the sliced brain tissues of dead terrorists to enter their memories and glean priceless intel.

Now Americans want to use the preserved brain tissue of SS General Ludwig von Berg, the legendary "Baron of the Black Order," to send Deker back to 1943. Deker's mission is to discover the fate of the lost biblical text and steal its formulas before his counterparts in the Alignment, a 21st-century successor to the SS, beat the U.S. to it.

The text not only spells out the end of the world, but the supernatural alchemy for Greek Fire, a thermodynamic technology that the ancient Greeks believed to have come from Atlantis and that the Americans now believe threatens the Earth.

Ultimately, Deker discovers that the past, present and future are not what they seem, as his path leads to a shattering secret that will change everything he knows about the universe.