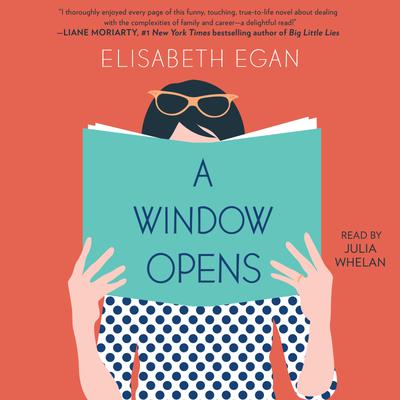 What happens when having it all proves too much to handle? In this “fresh, funny take on the age-old struggle to have it all” (People) a wife and mother of three leaps at the chance to fulfill her professional destiny—only to learn every opportunity comes at a price.

“A winning, heartfelt debut” (Good Housekeeping), A Window Opens introduces Alice Pearse, a compulsively honest, longing-to-have-it-all, sandwich generation heroine for our social-media-obsessed, lean in (or opt out) age. Like her fictional forebears Kate Reddy and Bridget Jones, Alice plays many roles (which she never refers to as “wearing many hats” and wishes you wouldn’t, either). She is a (mostly) happily married mother of three, an attentive daughter, an ambivalent dog-owner, a part-time editor, a loyal neighbor and a Zen commuter. She is not: a cook, a craftswoman, a decorator, an active PTA member, a natural caretaker, or the breadwinner. But when her husband makes a radical career change, Alice is ready to lean in—and she knows exactly how lucky she is to land a job at Scroll, a hip young start-up which promises to be the future of reading. The Holy Grail of working mothers―an intellectually satisfying job and a happy personal life―seems suddenly within reach.

Despite the disapproval of her best friend, who owns the local bookstore, Alice is proud of her new “balancing act” (which is more like a three-ring circus) until her dad gets sick, her marriage flounders, her babysitter gets fed up, her kids start to grow up, and her work takes an unexpected turn. In the midst of her second coming of age, Alice realizes the question is not whether it’s possible to have it all but, what does she really want the most?

“Smart and entertaining…with refreshing straight-forwardness and humor” (The Washington Post), “fans of I Don’t Know How She Does It and Where’d You Go, Bernadette will adore A Window Opens” (Booklist, starred review).