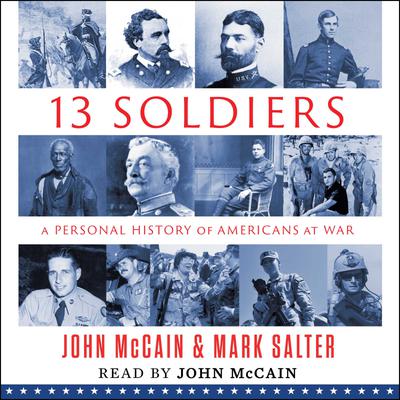 A Personal History of Americans at War

A personal history of war from bestselling authors John McCain and Mark Salter, told through the stories of thirteen remarkable American soldiers who fought in the nation’s major military conflicts, from the Revolution of 1776 through the wars in Iraq and Afghanistan.

As a veteran himself, a member of the Senate Armed Services Committee, and a long-time student of history, John McCain brings a distinctive perspective to the experience of war. With Mark Salter, Thirteen Soldiers tells the stories of real soldiers who personify valor, obedience, enterprise, and love. You’ll meet Joseph Plumb Martin, who at the tender age of fifteen fought in the Revolutionary War; Charles Black, a freeborn African American sailor in the War of 1812; and Sam Chamberlain, of the Mexican American War, whose life inspired novelist Cormac McCarthy. Then there’s Oliver Wendell Holmes, an aristocratic idealist disillusioned by the Civil War, and Littleton “Tony” Waller, court-martialed for refusing to massacre Filipino civilians.

Each story illustrates a particular aspect of war, such as Mary Rhoads, an Army reservist forever changed by an Iraqi scud missile attack during the Persian Gulf War; Monica Lin Brown, a frontline medic in rural Afghanistan who saved several lives in a convoy ambush; and Michael Monsoor, a Navy SEAL, who smothered a grenade before it could detonate on his men in Iraq. From their acts of self-sacrifice to their astonishing valor in the face of unimaginable danger, these “inspirational accounts of thirteen Americans who fought in various wars…aptly reveal humanizing moments in such theaters of cruelty” (Publishers Weekly).