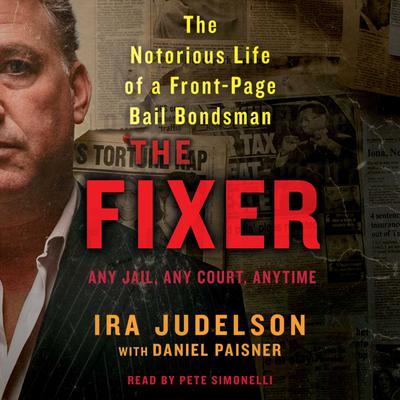 The Notorious Life of a Front-Page Bail Bondsman

From New York’s foremost bail bondsman with “over $30 million on the street” comes the story of a modern-day “fixer” who walks a fine line between hustler and humanitarian with clients ranging from the rich and famous to the mafia and gangs of New York.

With from-the-gut prose, Ira Judelson sheds light on the highs and lows of the bondsman life. But Judelson is no process server. He sees himself as a sort of modern day “macher”—using his juice as a bail bondsman to help friends old and new out of jams wherever he can. He is also a keenly observant and wildly charismatic insider who’s seen it all.

Prepare to be shocked and informed as Judelson reveals the unwritten laws of the courtroom and even prison—not to mention the shameless activities of his unbelievable list of clients, including former New York Giants Plaxico Burress and Lawrence Taylor; rappers Ol’ Dirty Bastard, Ja Rule, Lil’ Wayne, and DMX; comedian Katt Williams; notorious Manhattan madam Kristin Davis; and former IMF chief Dominique Strauss-Kahn. You’ll see why the New York Times describes Judelson as “an inevitable entry in the BlackBerrys of New York defense lawyers, an ATM for desperate rappers, actors, athletes, executives, and madams with pocketbooks much fatter than his.”

The Fixer is a rollicking narrative that follows Judelson as he learns the ins and outs of the down-and-dirty world of bonds: which judge might let you slide, which ones have zero tolerance, which lawyers do pro bono for the right case, and the cops and DAs who believe in second chances. Judelson illuminates a world almost entirely opaque to the general public, but also entertains and informs with the inside scoop on the underbelly of the justice system.