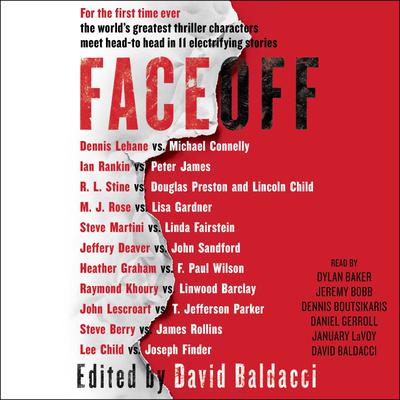 A New York Times and USA TODAY bestseller! Edited by #1 New York Times bestselling author David Baldacci and including stories by Michael Connelly, Lee Child, Jeffery Deaver, and more, this one-of-a-kind anthology pulls together the most beloved characters from the best and most popular thriller series today. Worlds collide!

In an unprecedented collaboration, twenty-three of the world’s bestselling and critically acclaimed thriller writers have paired their series characters—such as Harry Bosch, Jack Reacher, and Lincoln Rhyme—in an eleven-story anthology curated by the International Thriller Writers (ITW). All of the contributors to FaceOff are ITW members and the stories feature these dynamic duos:

· Patrick Kenzie vs. Harry Bosch in “Red Eye,” by Dennis Lehane and Michael Connelly
· John Rebus vs. Roy Grace in “In the Nick of Time,” by Ian Rankin and Peter James
· Slappy the Ventriloquist Dummy vs. Aloysius Pendergast in “Gaslighted,” by R.L. Stine, Douglas Preston, and Lincoln Child
· Malachai Samuels vs. D.D. Warren in “The Laughing Buddha,” by M.J. Rose and Lisa Gardner
· Paul Madriani vs. Alexandra Cooper in “Surfing the Panther,” by Steve Martini and Linda Fairstein
· Lincoln Rhyme vs. Lucas Davenport in “Rhymes With Prey,” by Jeffery Deaver and John Sandford
· Michael Quinn vs. Repairman Jack in “Infernal Night,” by Heather Graham and F. Paul Wilson
· Sean Reilly vs. Glen Garber in “Pit Stop,” by Raymond Khoury and Linwood Barclay
· Wyatt Hunt vs. Joe Trona in “Silent Hunt,” by John Lescroart and T. Jefferson Parker
· Cotton Malone vs. Gray Pierce in “The Devil’s Bones,” by Steve Berry and James Rollins
· Jack Reacher vs. Nick Heller in “Good and Valuable Consideration,” by Lee Child and Joseph Finder

So sit back and prepare for a rollicking ride as your favorite characters go head-to-head with some worthy opponents in FaceOff—it’s a thrill-a-minute read.