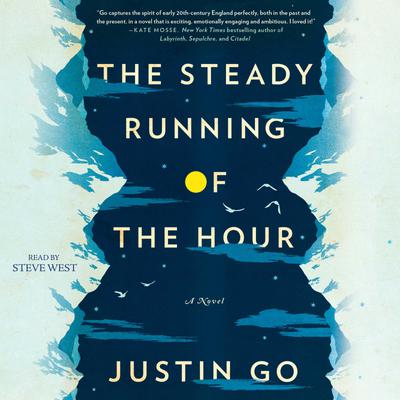 The Steady Running of the Hour

An impossible quest. An epic love story. A mesmerizing debut.

In 1924, the English mountaineer Ashley Walsingham dies attempting to summit Mount Everest, leaving his fortune to his long-lost lover, Imogen Soames-Andersson—whom he has not seen in seven years. Ashley’s attorneys search in vain for Imogen, but the estate remains unclaimed.

Nearly eighty years later, new information leads the same law firm to Tristan Campbell, a young American who could be the estate’s rightful heir. If Tristan can prove he is Imogen’s descendant, the inheritance will be his. But with only weeks before Ashley’s trust expires, Tristan must hurry to find the evidence he needs.

From London WWI archives to the battlefields in France to the fjords of Iceland, Tristan races to piece together the story behind the unclaimed riches: a reckless love affair pursued only days before Ashley’s deployment to the Western Front of the Great War; a desperate trench battle fought by soldiers whose hope is survival rather than victory; an expedition to the uncharted heights of the world’s tallest mountain. Following a trail of evidence that stretches to the far edge of Europe, Tristan becomes consumed by Ashley and Imogen’s story. But as he draws close to the truth, Tristan realizes he may be seeking something more than an unclaimed fortune.

The Steady Running of the Hour announces the arrival of a stunningly talented author. Justin Go’s “debut is ambitious in many ways…it depicts a love that transcends time and disdains convention; and it fluidly moves between past and present” (Publishers Weekly).