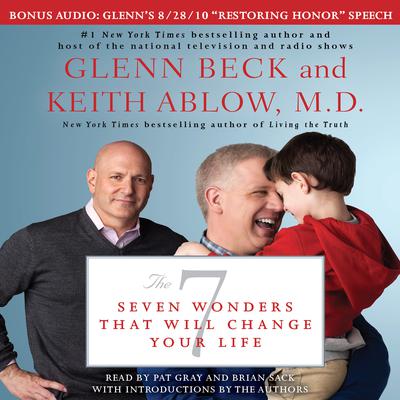 Seven Wonders That Will Change Your Life

Seven key principles that have helped radio and television host Glenn Beck through adversity—and how you can apply them to your own life.

Radio and television host Glenn Beck has experienced the rollercoaster of life like few others. From the suicide of his mother when he was just thirteen, to his eventual alcoholism, depression, divorce, unemployment, and health scares—Glenn has weathered life’s darkest storms.

Any one of those struggles could’ve ruined him, yet Glenn was able to keep moving forward. He saw past the darkness into the light; past his grief and addictions and into what his life could be.

The process of finding happiness through personal redemption was not easy, but it left Glenn with a blueprint for how to confront future adversity. Glenn is living proof that these steps—he calls them wonders—don’t just work on paper. They helped transform his life and can they can help to transform yours as well.

Glenn Beck and Dr. Keith Ablow—two of the most popular and influential personalities in American media today—have joined forces to present a powerful guide to personal transformation and fulfillment that is as unique as their own unlikely partnership. They are called the “7 Wonders” and they can be used by anyone who has made the decision that they are ready to change their life.

After the television talk show host and the bestselling psychiatrist struck up a fast friendship they realized that their experiences with life’s struggles were complementary. What Keith had studied, Glenn had lived. What Keith had counseled patients on for years, Glenn had suffered through for decades.

The deeply personal insights they shared brought them to realize that their life stories had seven key principles in common; seven wonders that seemed to be essential ingredients for anyone attempting to transform their life.