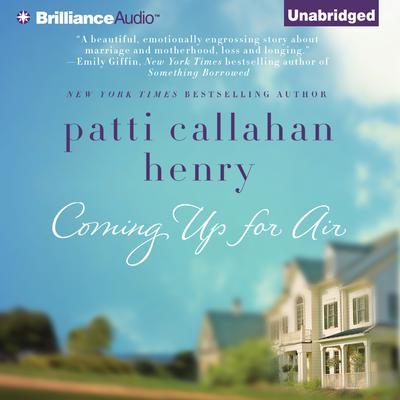 Coming Up for Air

On the coast of Alabama, there is a house cloaked in mystery, a place that reveals the truth and changes lives....

Ellie Calvin is caught in a dying marriage, and she knows this. With her beloved daughter away at college and a growing gap between her and her husband—between her reality and the woman she wants to be—she doesn’t quite seem to fit into her own life.

But everything changes after her controlling mother, Lillian, passes away. Ellie’s world turns upside down when she sees her ex-boyfriend, Hutch, at her mother’s funeral and learns that he is in charge of a documentary that involved Lillian before her death. He wants answers to questions that Ellie’s not sure she can face, until, in the painful midst of going through her mother’s things, she discovers a hidden diary—and a window into stories buried long ago.

As Ellie and Hutch start speaking for the first time in years, Ellie’s closed heart slowly begins to open. Fighting their feelings, they set out together to dig into Lillian’s history. Using both the diary and a trip to the Summer House, a mysterious and seductive bayside home, they gamble that they can work together and not fall in love again. But in piecing together a decades-old unrequited-love story, they just might uncover the secrets in their own hearts.

Coming Up for Air is the story of one woman’s search for truth—and what happens when love steps in along the way.