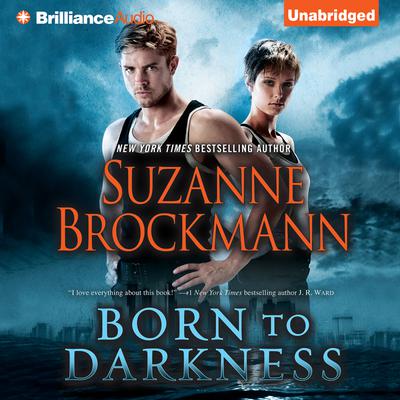 As the New York Times bestselling author of the Troubleshooters series and a “superstar of romantic suspense” (USA Today), Suzanne Brockmann has an acclaimed history of taking readers’ breath away with her novels of hot passion and high adventure. Now she takes her talent for sexy, action-packed storytelling in a thrilling new direction: forward—into a future, both fantastic and frightening, that only the brilliant Brockmann could envision.

Dishonorably discharged, former Navy SEAL Shane Laughlin is down to his last ten bucks when he finally finds work as a test subject at the Obermeyer Institute, a little-known and believed-to-be-fringe scientific research facility. When he enters the OI compound, he is plunged into a strange world where seemingly mild-mannered scientists—including women half his size—can kick his highly skilled ass.

Shane soon discovers that there are certain individuals who possess the unique ability to access untapped regions of the brain with extraordinary results—including telekinesis, super strength, and reversal of the aging process. Known as “Greater-Thans,” this rare breed is recruited by OI, where they are rigorously trained using ancient techniques to cultivate their powers and wield them responsibly.

But in the depths of America’s second Great Depression, where the divide between the haves and the have-nots has grown even wider, those who are rich—and reckless—enough have a quick, seductive alternative: Destiny, a highly addictive designer drug that can make anyone a Greater-Than, with the power of eternal youth. The sinister cartel known as The Organization has begun mass-producing Destiny, and the demand is epidemic. But few realize the drug’s true danger, and fewer still know the dirty secret of Destiny’s crucial ingredient.

Michelle “Mac” Mackenzie knows the ugly truth. And as one of the Obermeyer Institute’s crack team of operatives, she’s determined to end the scourge of Destiny. But her kick-ass attitude gets knocked for a loop when she finds that one of the new test subjects is none other than Shane, the same smoldering stranger who just rocked her world in a one-night stand. Although Shane isn’t a Greater-Than like Mac, as an ex-SEAL, he’s got talents of his own. But Mac’s got powerful reasons to keep her distance from him—and reasons that are just as strong to want him close. She’s used to risking her life, but now, in the midst of the ultimate war on drugs, she must face sacrificing her heart.

As the New York Times bestselling author of the Troubleshooters series and a “superstar of romantic suspense” (USA Today), Suzanne Brockmann has an acclaimed history of taking readers’ breath away with her novels of hot passion and high adventure. Now she takes her talent for sexy, action-packed storytelling in a thrilling new direction:... Read more »