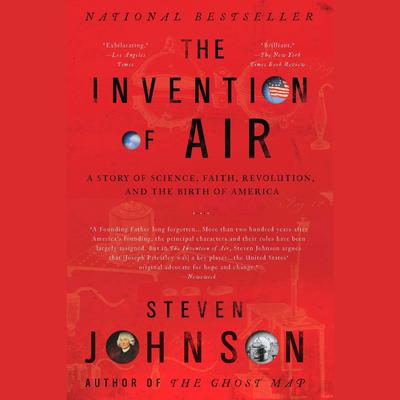 The Invention of Air

The Invention of Air is a book of world-changing ideas wrapped around a compelling narrative, a story of genius and violence and friendship in the midst of sweeping historical change that provokes us to recast our understanding of the Founding Fathers.

It is the story of Joseph Priestley—scientist and theologian, protégé of Benjamin Franklin, friend of Thomas Jefferson—an eighteenth-century radical thinker who played pivotal roles in the invention of ecosystem science, the discovery of oxygen, the founding of the Unitarian Church, and the intellectual development of the United States. And it is a story that only Steven Johnson, acclaimed juggler of disciplines and provocative ideas, can do justice to.

In the 1780s, Priestley had established himself in his native England as a brilliant scientist, a prominent minister, and an outspoken advocate of the American Revolution, who had sustained long correspondences with Franklin, Jefferson, and John Adams. Ultimately, his radicalism made his life politically uncomfortable, and he fled to the nascent United States. Here, he was able to build conceptual bridges linking the scientific, political, and religious impulses that governed his life. And through his close relationships with the Founding Fathers—Jefferson credited Priestley as the man who prevented him from abandoning Christianity—he exerted profound if little-known influence on the shape and course of our history.

As in his last bestselling work, The Ghost Map, Steven Johnson here uses a dramatic historical story to explore themes that have long engaged him: innovation and the way new ideas emerge and spread, and the environments that foster these breakthroughs. And as he did in Everything Bad Is Good for You, Johnson upsets some fundamental assumptions about the world we live in—namely, what it means when we invoke the Founding Fathers—and replaces them with a clear-eyed, eloquent assessment of where we stand today.