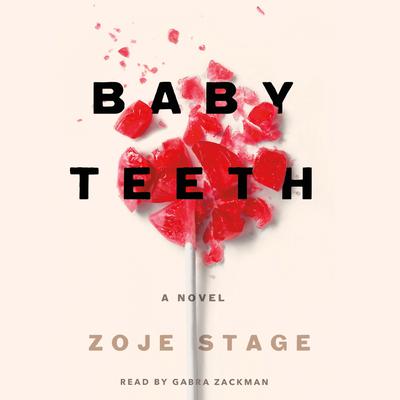 “I am a little afraid to write a review after finishing this book because I have the terrible feeling that I’m being watched, this due to the suspicion that seven-year-old Hannah has jumped from the pages of the book straight into my head — something she undoubtedly planned the entire time, despite the obvious impossibility of it all. I could not put this book down — simply fascinating.”

Debra Barrett, Where the Sidewalk Ends

A battle of wills between mother and daughter reveals the frailty and falsehood of familial bonds in award-winning playwright and filmmaker Zoje Stage’s tense audiobook of psychological suspense, Baby Teeth.

Afflicted with a chronic debilitating condition, Suzette Jensen knew having children would wreak havoc on her already fragile body. Nevertheless, she brought Hanna into the world, pleased and proud to start a family with her husband Alex. Estranged from her own mother, Suzette is determined to raise her beautiful daughter with the love, care, and support she was denied.

But Hanna proves to be a difficult child. Now seven-years-old, she has yet to utter a word, despite being able to read and write. Defiant and anti-social, she refuses to behave in kindergarten classes, forcing Suzette to homeschool her. Resentful of her mother’s rules and attentions, Hanna lashes out in anger, becoming more aggressive every day. The only time Hanna is truly happy is when she’s with her father. To Alex, she’s willful and precocious but otherwise the perfect little girl, doing what she’s told.

Suzette knows her clever and manipulative daughter doesn’t love her. She can see the hatred and jealousy in her eyes. And as Hanna’s subtle acts of cruelty threaten to tear her and Alex apart, Suzette fears her very life may be in grave danger…

“We Need to Talk About Kevin meets Gone Girl meets The Omen....a twisty, delirious read that will constantly question your sympathies for the two characters as their bond continues to crumble.” —Entertainment Weekly