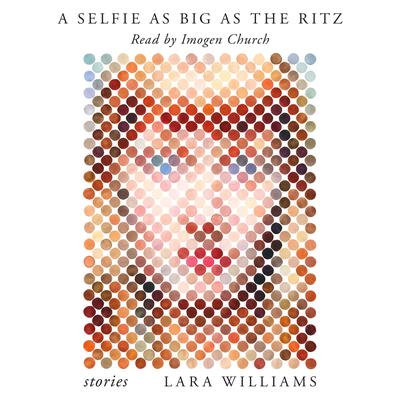 A Selfie as Big as the Ritz

"If you're a young woman navigating life's crazy and wondrous tumult, British writer Lara Williams' new story collection A Selfie as Big as the Ritz is for you." — ELLE

British author Lara Williams perfectly captures the bleak, surreal, and often hilarious period of life that every late-twenties woman will recognize in this charming audiobook.

She finds herself single, twenty-nine, partially-employed, and about a half a stone overweight. Roller dexter of eligible friends rattling thin. Thirties breathing down her neck like an inappropriate uncle. She jogs. Looks good in turquoise. Finds herself punctuating gas “better out than in!” patting her stomach like a department store Santa. This is who I am, she thinks.

The women in Lara Williams’ debut story collection, A Selfie as Big as the Ritz, navigate the tumultuous interval between early twenties and middle age. In the title story, a relationship implodes against the romantic backdrop of Paris. In “One of Those Life Things,” a young woman struggles to say the right thing at her best friend’s abortion. In “Penguins,” a girlfriend tries to accept her boyfriend’s bizarre sexual fantasy. In “Treats,” a single woman comes to terms with her loneliness. As Williams’ characters attempt to lean in, fall in love, hold together a family, fend off loneliness, and build a meaningful life, we see them alternating between expectation and resignation, giddiness and melancholy, the rollercoaster we all find ourselves on.

“A dark wonder. An often harrowing (and in parts, very, very funny) debut, it targets the unfathomable nonsense of relationships, work and modern living with a keen eye, head-spinning wordplay and enough compassion to crush your heart. Buy it for everyone you know." —The Skinny