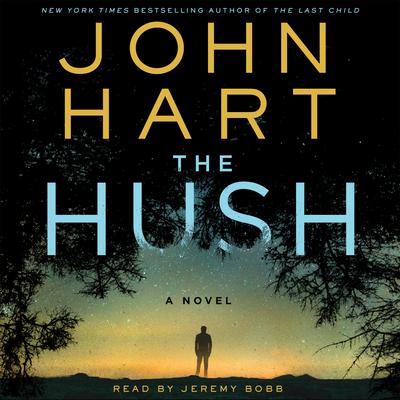 “The Hush, set 10 years after The Last Child, explores what Johnny Merrimon has made of his life. Despite all the publicity around the events of his childhood, Johnny tries to keep a low profile, staying hidden in the swamp of Hush Arbor, where he feels a connection to his land. The only person he wants to see is his childhood friend, Jack, who senses an evil presence in the swamp Johnny loves so much. When bodies start piling up on Johnny's land, the sheriff is convinced that Johnny had something to do with the deaths. Hart does not disappoint with his newest book, a story about friendship, family, and connection. His writing will draw you in from the first chapter, and you'll be hooked until the end.”

"The story is greatly enhanced by narrator Jeremy Bobb. No character is too small for Bobb's vocal attention...A great example of a riveting story enhanced by a creative, consistent narration." — AudioFile Magazine

The only writer in history to win consecutive Edgar Awards for Best Novel, New York Times bestselling author John Hart returns to the world of his most beloved story, The Last Child

Set in the same dark world as his beloved novel The Last Child, John Hart delivers a stunning vision of a secret world — rarely seen — in this unforgettable audiobook.

It’s been ten years since the events that changed Johnny Merrimon’s life and rocked his hometown to the core. Since then, Johnny has fought to maintain his privacy, but books have been written of his exploits; he has fans, groupies. Living alone in the wilderness beyond town, Johnny’s only connection to normal life is his old friend, Jack. They’re not boys anymore, but the bonds remain. What they shared. What they lost.

But Jack sees danger in the wild places Johnny calls home; he senses darkness and hunger, an intractable intent. Johnny will discuss none of it, but there are the things he knows, the things he can do. A lesser friend might accept such abilities as a gift, but Jack has felt what moves in the swamp: the cold of it, the unspeakable fear.

More than an exploration of friendship, persistence, and forgotten power, The Hush leaves all categories behind, and cements Hart's status as a writer of unique power.