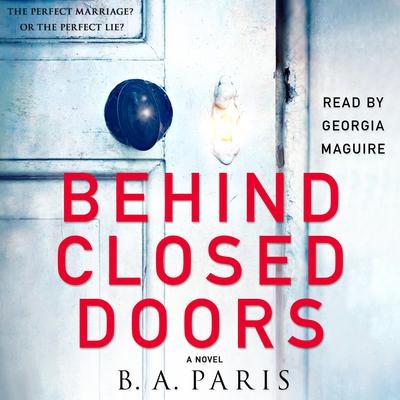 “Jack is charming and handsome, but underneath his cool exterior is a brutal psychopath who thrives on terrifying others. His wife, Grace, found out too late that he is a monster who seeks to control everything she does. Even her sister, Millie, a handicapped young woman who depends on Grace, is part of Jack's vicious plan. Paris has crafted a riveting, intense tale that will keep readers on the edge of their seats until the last page.”

“A hair-raising debut, both unsettling and addictive...A chilling thriller that will keep you reading long into the night.” —Mary Kubica, New York Times and USA Today bestselling author of The Good Girl

“This debut is guaranteed to haunt you...Warning: brace yourself.” —Bustle (10 New Thrillers to Read This Summer)

“The sense of believably and terror that engulfs Behind Closed Doors doesn't waver.” —The Associated Press, picked up by The Washington Post

Everyone knows a couple like Jack and Grace. He has looks and wealth; she has charm and elegance. He’s a dedicated attorney who has never lost a case; she is a flawless homemaker, a masterful gardener and cook, and dotes on her disabled younger sister. Though they are still newlyweds, they seem to have it all. You might not want to like them, but you do. You’re hopelessly charmed by the ease and comfort of their home, by the graciousness of the dinner parties they throw. You’d like to get to know Grace better.

But it’s difficult, because you realize Jack and Grace are inseparable.

Some might call this true love. Others might wonder why Grace never answers the phone. Or why she can never meet for coffee, even though she doesn’t work. How she can cook such elaborate meals but remain so slim. Or why she never seems to take anything with her when she leaves the house, not even a pen. Or why there are such high-security metal shutters on all the downstairs windows.

Some might wonder what’s really going on once the dinner party is over, and the front door has closed.

From bestselling author B. A. Paris comes the gripping thriller and international phenomenon Behind Closed Doors.