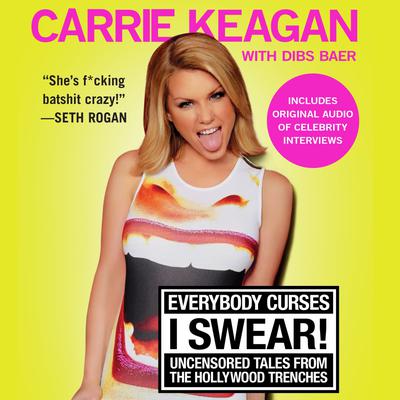 Everybody Curses, I Swear!

Uncensored Tales from the Hollywood Trenches

This program is read by the author and includes original recordings with:

She’s been called vulgar, crass, sophomoric, offensive and dirty...and that was just in one article. But there’s so much more to talk show host, internet entrepreneur, and original YouTube sensation, Carrie Keagan. You may know her as host, writer, and producer of VH1’s hit morning show Big Morning Buzz Live with Carrie Keagan, but before Judd Apatow made being dirty mainstream, she was pioneering the R-rated, A-List celebrity digital video to an audience of tens of millions on one of the first and most successful YouTube networks ever, No Good TV. She’s turned swearing into an art-form and invited all of Hollywood to join in.

Some women f*ck their way to the top but she “f*cked” her way to the top. Her naughty interviews with Hollywood’s elite are the stuff of legend, earning her the nickname “Barbara Walters on Acid.” She’s gone toe-to-toe with virtually every celebrity in the world, and she’s been taking notes. Get ready for all the juicy, behind-the-scenes stories from the biggest stars as she shares her journey from being a bullied kid from Buffalo to Hollywood’s most fearless host. After 8,000 interviews, 2 billion views online, her own TV show, and countless appearances including her upcoming season on Celebrity Apprentice, she’s got crazy stories to tell.

Everybody Curses, I Swear! is the quintessential audiobook on the wonderful world of potty-mouthed depravity inside Hollywood!