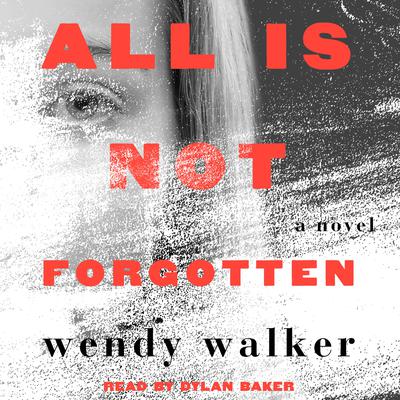 All Is Not Forgotten

All Is Not Forgotten

“This powerful and intense psychological thriller explores the memory of trauma and how it affects our very being. When 16-year-old Jenny Kramer is brutally raped and then given a controversial drug to erase her memory of the event, her parents think it will allow them all to return to their normal, idyllic life in an affluent small town in Connecticut. But that is far from the truth. What ensues is a fascinating look at psychiatric treatment and the lies people tell themselves and others in order to feel whole. Secrets are revealed and integrity is tested as, indeed, all is not forgotten.”

"An assured, powerful novel that blends suspense and rich family drama...it is, in a word, unforgettable." --William Landay, author of DEFENDING JACOB

Wendy Walker's All Is Not Forgotten begins in the small, affluent town of Fairview, Connecticut, where everything seems picture perfect.

Until one night when young Jenny Kramer is attacked at a local party. In the hours immediately after, she is given a controversial drug to medically erase her memory of the violent assault. But, in the weeks and months that follow, as she heals from her physical wounds, and with no factual recall of the attack, Jenny struggles with her raging emotional memory. Her father, Tom, becomes obsessed with his inability to find her attacker and seek justice while her mother, Charlotte, prefers to pretend this horrific event did not touch her carefully constructed world.

As they seek help for their daughter, the fault lines within their marriage and their close-knit community emerge from the shadows where they have been hidden for years, and the relentless quest to find the monster who invaded their town - or perhaps lives among them - drive this psychological thriller to a shocking and unexpected conclusion.