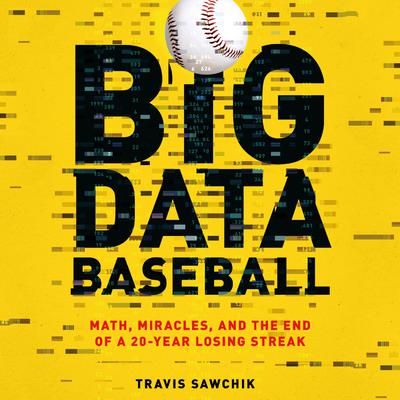 Math, Miracles, and the End of a 20-Year Losing Streak

After twenty consecutive losing seasons for the Pittsburgh Pirates, team morale was low, the club's payroll ranked near the bottom of the sport, game attendance was down, and the city was becoming increasingly disenchanted with its team. Pittsburghers joked their town was the city of champions…and the Pirates. Big Data Baseball is the story of how the 2013 Pirates, mired in the longest losing streak in North American pro sports history, adopted drastic big-data strategies to end the drought, make the playoffs, and turn around the franchise's fortunes.

Award-winning journalist Travis Sawchik takes you behind the scenes to expertly weave together the stories of the key figures who changed the way the small-market Pirates played the game. For manager Clint Hurdle and the front office staff to save their jobs, they could not rely on a free agent spending spree, instead they had to improve the sum of their parts and find hidden value. They had to change. From Hurdle shedding his old-school ways to work closely with Neal Huntington, the forward-thinking data-driven GM and his team of talented analysts; to pitchers like A. J. Burnett and Gerrit Cole changing what and where they threw; to Russell Martin, the undervalued catcher whose expert use of the nearly-invisible skill of pitch framing helped the team's pitchers turn more balls into strikes; to Clint Barmes, a solid shortstop and one of the early adopters of the unconventional on-field shift which forced the entire infield to realign into positions they never stood in before. Under Hurdle's leadership, a culture of collaboration and creativity flourished as he successfully blended whiz kid analysts with graybeard coaches—a kind of symbiotic teamwork which was unique to the sport.Big Data Baseball is Moneyball on steroids. It is an entertaining and enlightening underdog story that uses the 2013 Pirates season as the perfect lens to examine the sport's burgeoning big-data movement. With the help of data-tracking systems like PitchF/X and TrackMan, the Pirates collected millions of data points on every pitch and ball in play to create a tome of color-coded reports that revealed groundbreaking insights for how to win more games without spending a dime. In the process, they discovered that most batters struggled to hit two-seam fastballs, that an aggressive defensive shift on the field could turn more batted balls into outs, and that a catcher's most valuable skill was hidden. All these data points which aren't immediately visible to players and spectators, are the bit of magic that led the Pirates to spin straw in to gold, finish the 2013 season in second place, end a twenty-year losing streak.