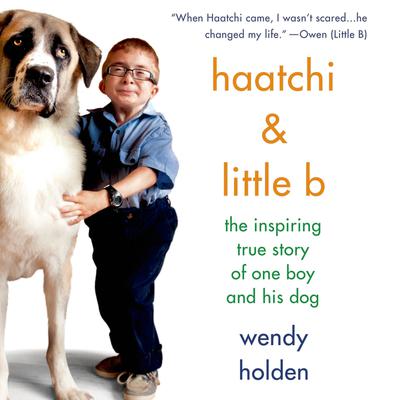 The Inspiring True Story of One Boy and His Dog

When Owen met Haatchi, the lives of one adorable little boy and one great, big dog were destined to change forever.

Owen-known to his family as "little buddy" or "Little B"-has a rare genetic disorder that leaves him largely confined to a wheelchair. Before being united with Haatchi, Little B was anxious and found it difficult to make friends.

Haatchi-an adorable Anatolian Shepherd puppy-was abused and left for dead on railroad tracks. He was struck by an oncoming train, and although his life was saved, his leg and tail were partially severed. Haatchi was left massively disabled and totally dispirited.

But kind-hearted Will and Colleen Howkins, Little B's father and step-mother, decided to introduce the big dog and the little boy to each other, and an unbelievable bond was formed that transformed both boy and dog in miraculous ways.

Wendy Holden's Haatchi & Little B is the true story of an astonishing little boy, a very special dog, and the inspiring, inseparable pair that they make together.