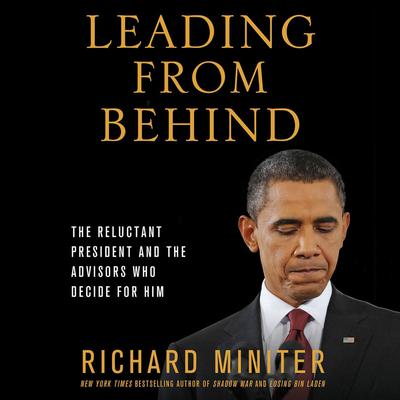 The Reluctant President and the Advisors Who Decide for Him

In the New York Times bestselling Leading from Behind, investigative journalist Richard Miniter presents the first book to explore President Obama's abilities as a leader, by unearthing new details of his biggest successes and failures. Based on exclusive interviews and never-before-published material, Leading from Behind investigates the secret world of the West Wing and the combative personalities that shape historic events.

Contrary to the White House narrative, which aims to define Obama as a visionary leader, Leading from Behind reveals a president who is indecisive, moody, and often paralyzed by competing political considerations. Many victories—as well as several significant failures—during the Obama presidency are revealed to be the work of strong women, who led when the president did not: then-Speaker Nancy Pelosi; Secretary of State Hillary Clinton; and Valerie Jarrett, his closest adviser and an Obama family confidante, whose unusual degree of influence has been a source of conflict with veteran political insiders.

In Leading from Behind, you will learn:

· ObamaCare wasn't Obama's idea. It was House Speaker Nancy Pelosi's. And the real reason he danced to her tune.

· Obama delayed and canceled the mission to kill Osama bin Laden three times and then committed an intelligence blunder that allowed dozens of high-level members of al Qaeda to escape.

· Why Obama destroyed a secret budget deal with House Speaker John Boehner that would have reformed entitlements, slashed spending, and reduced the national debt—without raising taxes
· Why Obama is determined to save Attorney General Eric Holder, even though he has mislead and stonewalled Congress about "Operation: Fast and Furious"
· Why Obama decided to defy the Tea Party and ditch his plans to end earmarks
In Leading from Behind, Richard Miniter's provocative research offers a dramatic, thoroughly sourced account of President Obama's White House during a time of intense domestic controversy and international turmoil.