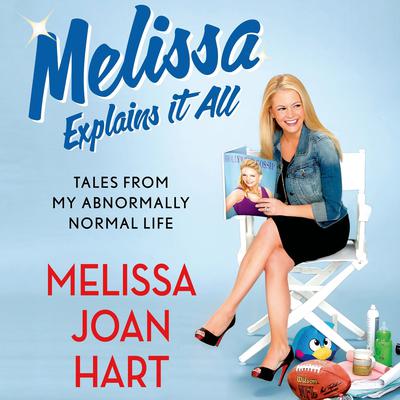 Melissa Explains It All

Tales from My Abnormally Normal Life

Melissa Joan Hart explained it all—from dating to bullies—in her groundbreaking role as Clarissa Darling on Clarissa Explains It All. She cast a spell on millions more television viewers as Sabrina, the Teenage Witch. Now, in Melissa Explains It All, Melissa tells the frank and funny behind-the-scenes stories from her extraordinary past and her refreshingly normal present.

Melissa has been entertaining audiences most of her life; when there were no girls named Melissa on her favorite show, the forceful four year old decided she'd get on TV her way. From that moment on, Melissa has shown a singular determination and focus—whether it's for booking three national commercials so her dad would build her a tree house or for nailing the audition for Clarissa.

From her first commercial to her current starring role in ABC Family's hit Melissa and Joey, Hart never let fame go to her head. She always had one foot in Hollywood and one foot in reality—and still does. Melissa makes us laugh along with her as she talks about:

--guest appearances in shows like Saturday Night Live and The Equalizer
--auditioning for Punky Brewster and Clarissa
--her early Broadway days
--wacky parties she's thrown and attended
-- the actors who influenced her and whom she befriended, worked with and competed against
--her experiences both on and off-set—with Sabrina's Salem the Cat and Elvis the Alligator on Clarissa
--how she met the love of her life at the Kentucky Derby

Melissa Joan Hart explains all that she's learned along the way—what's kept her grounded, normal and working when others have not been so fortunate—and that she's the approachable, hilarious girl-next-door her fans have always thought she'd be.