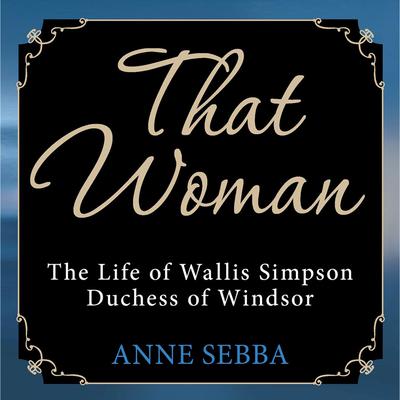 The Life of Wallis Simpson, Duchess of Windsor

The first full scale biography of Wallis Simpson to be written by a woman, exploring the mind of one of the most glamorous and reviled figures of the Twentieth Century, a character who played prominently in the blockbuster film The King's Speech.

This is the story of the American divorcee notorious for allegedly seducing a British king off his throne. "That woman," so called by Queen Elizabeth, The Queen Mother, was born Bessie Wallis Warfield in 1896 in Baltimore. Neither beautiful nor brilliant, she endured an impoverished childhood, which fostered in her a burning desire to rise above her circumstances.

Acclaimed biographer Anne Sebba offers an eye-opening account of one of the most talked about women of her generation. It explores the obsessive nature of Simpson's relationship with Prince Edward, the suggestion that she may have had a Disorder of Sexual Development, and new evidence showing she may never have wanted to marry Edward at all.

Since her death, Simpson has become a symbol of female empowerment as well as a style icon. But her psychology remains an enigma. Drawing from interviews and newly discovered letters, That Woman shines a light on this captivating and complex woman, an object of fascination that has only grown with the years.