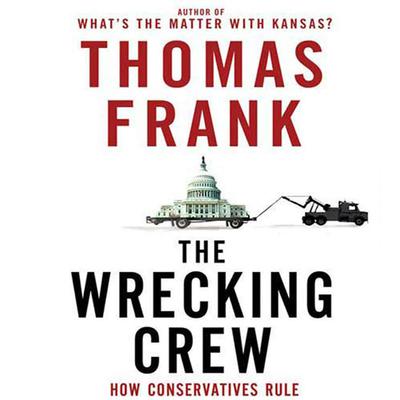 In his previous book, Thomas Frank explained why working America votes for politicians who reserve their favors for the rich. Now, in Wrecking Crew, Frank examines the Washington those politicians have given us, showing why, no matter what happens in November 2008, we're stuck with it for the foreseeable future.

Casting back to the early days of the conservative revolution, Frank describes the rise of a ruling coalition dedicated to dismantling government. But rather than cutting down the big government they claim to hate, conservatives have simply sold it off, deregulating some industries, defunding others, but always turning public policy into a private-sector bidding war. Washington itself has been remade into a golden landscape of super-wealthy suburbs and gleaming lobbyist headquarters. And though arch-lobbyist Jack Abramoff has crashed and burned, the government-by-entrepreneurship he pioneered so outrageously has become the law of the land.

It is no coincidence, Frank argues, that the same politicians who guffaw at the idea of effective government have installed a regime in which incompetence is the rule. Nor will the country easily shake off the consequences of deliberate misgovernment through the usual election remedies. Obsessed with achieving a lasting victory, conservatives have taken pains to enshrine the free market as the permanent creed of state.

Stamped with Frank's audacity, analytic brilliance, and wit, Wrecking Crewis his most revelatory work yet—and his most important.