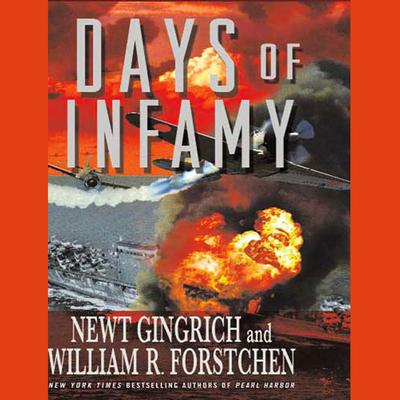 Gingrich and Forstchen's now critically acclaimed approach, which they term "active history," examines how a change in but one decision might have profoundly altered American history. In Pearl Harbor they explored how history might have been changed if Admiral Yamamoto had directly led the attack on that fateful day, instead of remaining in Japan. Building on that promise, Days of Infamy starts minutes after the close of Pearl Harbor, as both sides react to the monumental events triggered by the presence of Admiral Yamamoto.

In direct command of the six carriers of the attacking fleet, Yamamoto decides to launch a fateful "third-wave attack" on the island of Oahu, and then keeps his fleet in the area to hunt down the surviving American aircraft carriers, which by luck and fate were not anchored in the harbor on that day.

Historians have often speculated about what might have transpired from legendary "matchups" of great generals and admirals. In this story of the aftermath of Pearl Harbor, the notorious gambler Yamamoto is pitted against the equally legendary American admiral Bill Halsey in a battle of wits, nerve, and skill.Days of Infamy recounts this alternative history from a multitude of viewpoints---from President Roosevelt, Prime Minister Churchill, and the two great admirals, on down to American pilots flying antiquated aircraft, bravely facing the vastly superior Imperial Japanese Navy aircraft.

Gingrich and Forstchen have written a sequel that's as much a homage to the survivors of the real Pearl Harbor attack as it is an imaginative and thrilling take on America's entry into World War II.
Praise for the first audiobook in the Pacific War Series, Pearl Harbor:

"Masterful storytelling that not only captures the heroic highs and hellish lows of that horrific day which lives on in infamy--it resonates with today's conflicts and challenges."
--William E. Butterworth IV, New York Times bestselling author of The Saboteurs 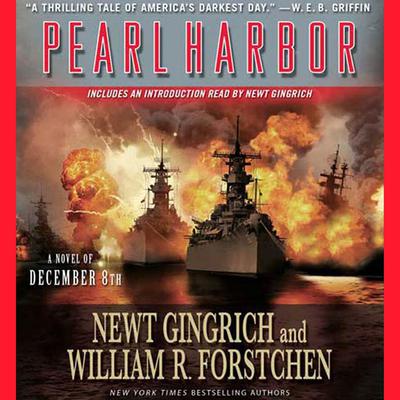 "A Thrilling Tale of the Attack That Marked America's Darkest Day"
---W.E.B. Griffin

President Franklin D. Roosevelt's speech on December 8, 1941, lasted a mere six and half minutes. But his words and tone—in a monologue that would later be named the Infamy Speech—sent ripples into a nation and a world that continue even today. The historical... Read More »

Gingrich and Forstchen's now critically acclaimed approach, which they term "active history," examines how a change in but one decision might have profoundly altered American history. In Pearl Harbor they explored how history might have been changed if Admiral Yamamoto had directly led the attack on that fateful day, instead of remaining in... Read More »