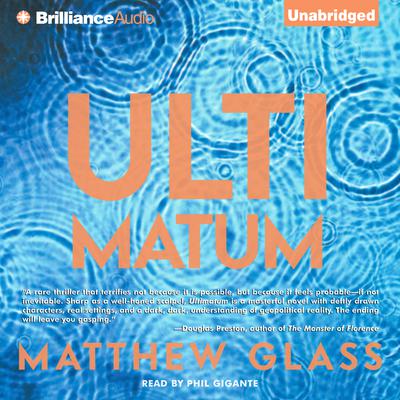 November 2032, Joe Benton has just been elected the 48th president of the United States. Only days after winning, Benton learns from his predecessor that previous estimates regarding the effect of global warming on rising sea levels have been grossly underestimated. With the world frighteningly close to catastrophe, Benton must save the United States from environmental devastation. He resumes secret bilateral negotiations with the Chinese--the world's worst polluter--and as the two superpowers lock horns, the ensuing battle of wits becomes a race against time. With tension escalating on almost every page and building to an astonishing climax, Matthew Glass's visionary and deeply unsettling thriller steers us into the dark heart of political intrigue and a future that is all too believable. "A rare thriller that terrifies not because it is possible, but because it feels probable--if not inevitable. Sharp as a well-honed scalpel, Ultimatum is a masterful novel with deftly drawn characters, real settings, and a dark, dark, understanding of geopolitical reality. The ending will leave you gasping."--Douglas Preston, author of The Monster of Florence "Prophetic. I hope to God this isn't the future--but Matthew Glass makes it all so believable that I fear for our planet."--Lincoln Child, author of Deep Storm