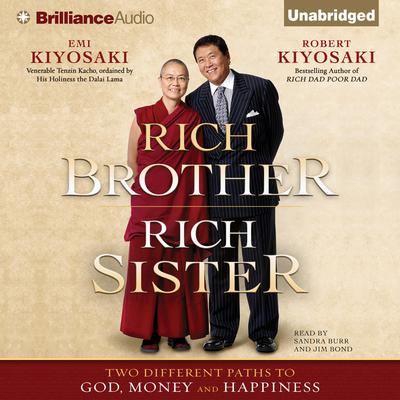 Together, then apart, then together again, as a brother and a sister discover the riches of life. Rich Brother, Rich Sister combines the inspirational, true life stories of Robert Kiyosaki and his sister Emi Kiyosaki (Venerable Tenzin Kacho) into a book that will reaffirm your belief in the power of purpose, the importance of action, and the ability to overcome obstacles in a quest for a rich life.

In 1962, the United States detonated an atomic bomb ten miles off the coast of Christmas Island in the South Pacific. From that moment, two people, born of the same parents into the same household with the same childhood experiences, found themselves on distinctly different paths toward God, money, and happiness. Robert became a world-famous entrepreneur, author, and teacher of all things financial. Emi became a highly devout Buddhist nun, author, and teacher of all things spiritual.

Their lives took them from the Big Island of Hawaii to Cam Ranh Bay in Vietnam, to the hippie communes in Haight-Ashbury and to a monastery in India, to private encounters with Dr. R. Buckminster Fuller, to a seat at the foot of His Holiness the Dalai Lama, and ultimately back together again. Robert faced death in war, and Emi faced it in the form of cancer. They took risks, made mistakes, learned life’s lessons, and found their own truths. They discovered the peace, the happiness, and the wealth that come through living the lives they were meant to live, the way they were meant to live them. This book will inspire you along your own life’s journey as you search for your own truths, purpose, and path to wealth—both financial and spiritual—to achieve all the riches of life that were meant for you...and for us all.