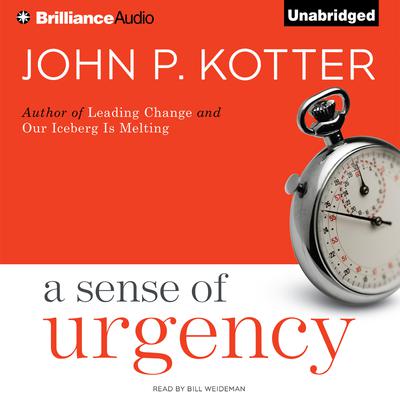 A Sense of Urgency

True urgency is a gut-level determination to move and win, now.

It’s practitioners are unusually alert. They come to work each day determined to achieve something important, and they shed irrelevant activities to move faster and smarter. Those with a sense of urgency are the opposite of complacent—but they are not stressed-out and anxious, generating great activity without much productivity. Instead, they move boldly toward the future—sharply on the lookout for the hazards and the opportunities that change brings.

Bestselling author and business guru John Kotter knows about urgency. “Raising urgency” is the first step in his enormously successful eight-step framework, first articulated in Leading Change. But as Kotter illustrates, increasing urgency is the toughest of the eight steps, and the one without which even the most brilliant, high-powered initiatives will sputter and die. More importantly, as we transition to a world where change is continuous—not just episodic—he shows how urgency must become a core, sustained capability.

With vivid and powerful stories, Kotter reveals a distinctive view of the kind of urgency needed in every organization. He also highlights the insidious nature of its nemesis, complacency, in all its guises. He explains the crucial difference between constructive true urgency, and the frantic wheel spinning that is so often mistaken for urgency. He provides key tactics for increasing urgency, as well as exposing and rooting out complacency, with chapters on:

A Sense of Urgency is a powerful tool for anyone wanting to win in a turbulent world that will only continue to move faster.